Kumiko and I attended a performance by Bonobo last night at the Showbox Theater, part of Seattle's Decibel Festival of electronic music. 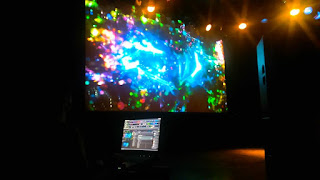 I was initially drawn to Bonobo's music by his occasional use of tuned percussion, as in the track 'Cirrus' and other Bonobo pieces.

I have long been drawn to 'gamelan-like' sounds and music. I'm not sure when it started, exactly, but for as long as I can remember, my music collection has included music for struck percussion. This has led me to discover many different styles of great music, including unaccompanied marimba pieces by contemporary Japanese composers, Afro-pop, the acoustic jazz of Rez Abbasi and, most recently, electronic music.

My first exposure to electronic music probably came through two CDs. I had (thanks to my love of marimbas) long been a fan of minimalist composer Steve Reich. The release of the two 'Reich Remixed' CDs showed clearly how Reich had influenced a generation or more of electronic musicians.

Posted by Kenneth Lawrence at 3:55 PM